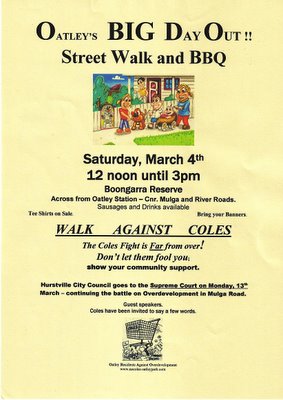 The Coles Fight is Far from over!
Don’t let them fool you;
show your community support.

Hurstville City Council goes to the Supreme Court on Monday, 13th March – continuing the battle on Overdevelopment in Mulga Road.

Guest speakers.
Coles have been invited to say a few words.

I was relieved to read that Hurstville Council still has $5.3 million in reserve in Section 94 contributions from developers who pay for local infrastructure improvements (“$577m left to fill up the council’s coffers”, Leader, January 10). Included in that amount should be the $71,557.52 that Renaldo Gaiety kindly contributed when he lodged his development application for the Coles supermarket in Oatley. According to council documents, $39,224 of Mr Gaiety’s Section 94 contributions is to be spent on open space and community recreation, and $20,388.00 on community services and facilities. In the past councils had to spend the Section 94 contributions in the area of the development. However, after legislation passed by the State Government last year, councils can now use their discretion in how these contributions are distributed. Will our community benefit from Mr Gaiety’s gift?
Anne Wagstaff
Oatley

Mr Kasper’s letter “A hole lot of confusion” (Leader, February 2) is adding to the misinformation about the Mulga Road development. He has been informed that Hurstville Council has worked hard consistently to protect the community interest in this case and is still continuing this fight.
The council’s decision to appeal the case to the Supreme Court does not mean that we can force the applicant to stop work on the site until the appeal is heard.
The developer has a legal consent, which it received from the bind and Environment Court last November, and provided it complies with the court’s conditions, it can undertake site preparation.
The issuing of a construction certificate by a private certifier allowed the start of excavation works on the site before last Christmas.
The council is still committed to opposing this development and has taken the necessary steps to fight on the community’s behalf.
Cr Vlnce Badalati
Mayor
Hurstvllle Council

Hurstville Council’s general manager (Leader, December23) in respect to the Mulga Road supermarket, states that the application for the supermarket was subject to assessment by the council on December2004, in accordance with the controls that were operative ;li the time the applicat ion was lodged and could not be assessed retrospectively by an
amendment that was subsequent to the application.
The general manager stated that there was not sufficient timr , as at December 2004, to amend the council’s Local Lnvironment Plan (LEP) to include its previously intended objectives for small neighbourhood centres.
But he misses the salient point— there was ample time for the minister to approve an amendment to the LEP before the court hearing of March 2005. This allowed a further three months after the council refused the application in Decembcr 2004 and a total of eight months from when the residents first asked that this be done. If an amendment had been
approved by the minister or evidence produced to the court that its approval was imminent or certain, the court would almost certainly have upheld the council’s refusal.
The general manager appears to have been misinformed that an appllication can only be assessed on the controls that were operative at the time of the application. This view is contrary to the principle that retrospective and draft amendments are required to be considered under Clause 79c of the LP&A Act.
The council’s solicitors are appealing to the Supreme Court in the hope that, if successful, they will be able to retrospectively submit the now- approved amendment as evidence in the Land and Environment Court.
Ted Cooper
Oatley Residents Association