Residents suffering due to Coles development

Within hours of Mulga Road developers contacting council, No Stopping signs were placed opposite the Coles supermarket construction site.
See story in Leader 9 March 2006 (Click on photo for enlargement) 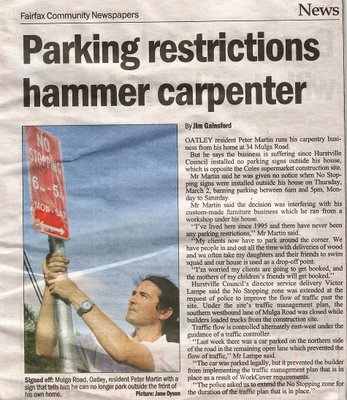 Coles Mulga Road truck danger – Leader,March 2006
The newly erected signs regarding parking at the front of the proposed Coles site in Mulga Rd were installed without first notifying the local residents.

While I can understand the need to have a Work Zone directly in front of the site, the erection of the No Stopping sign on the other side of the road was a bit perplexing so I queried it with Hurstville council.

Their response was that the approval of the signage was rushed through at the request of Hurstville Police, because the trucks turning on Mulga Rd into the site were a dangerous traffic hazard.

Why didn’t Hurstville City Council, The Land and Environment Court, the developer or Coles, foresee this as a problem?

Are these the same experts who do not foresee a problem with Coles delivery trucks? The thousands of local residents who have signed petitions against this gross overdevelopment sure did.


Renaldo to the rescue
Next time I want an issue of road safety at Oatley West School addressed I am going to get Coles developer, Renaldo Gaiety, to ring his mates at Hurstville Council.

His problem was his own traffic management plan. It failed to work so council sent out a team which specified the need, designed a "solution", consulted its traffic committee and erected new signs stopping the residents from parking in front of their houses (but did not bother informing them of the fact) all within two hours.

I, on the other hand, emailed Hurstville City Council on Wednesday (having been instructed to do so by police) and requested they address a safety issue at the school only to be told that they would try to get there sometime next week but could not make any promises about when.

In council’s eyes the needs and safety of our children comes well after the needs of the Coles developer.

Can council be serious about their appeal to the Supreme Court next Monday?

Our roving reporter David Koffel has just returned from England with this news.
He has written to the Leader highlighting that the Coles issue is not a local issue. Over 200 communities in England are campaigning against the giant supermarket chains Tesco and Sainsburys .

David's letter to the leader:
(not published yet)
Congratulations to The Leader on its objective coverage of the Oatley rally and streetwalk against Coles, (‘We don’t want to be fed this: residents’. 7 March, 2006).
The people of Oatley are not alone in their struggle to keep their neighbouring shops local.
On a recent brief trip to Britain I was interested to discover that in that country there are over 200 local community groups campaigning against giant supermarket chains (Tesco and Sainsburys).

These local community groups have the same concerns as we in Oatley have: that these supermarkets damage our neighbourhoods and destroy the sense of communal loyalty of small villages and small shopping streets such as Mulga Road.

One British community successfully lobbied to drive away Starbucks. The battle can be won.
Declining patronage of McDonalds has led to that company closing 25 of its British ‘restaurants’ as locals took their custom elsewhere. McDonalds’ European president admitted that his company is facing something of a consumer backlash.

Similar local sentiment is strong in Italy and France.

It is only natural for people to keep the ‘local’ in their local community.
David Koffel
Oatley West 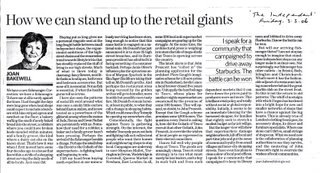 # posted by Oatley Residents Against Overdevelopment @ 11:58 AM 0 comments 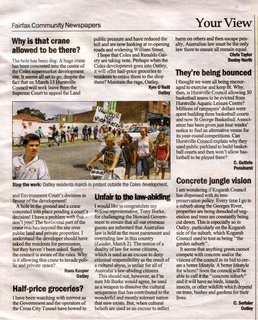 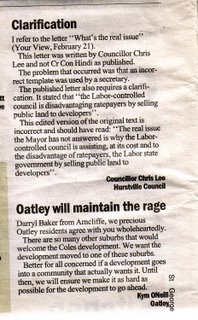 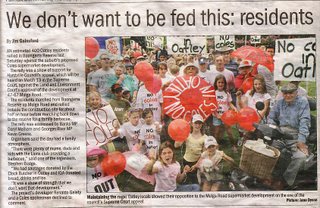 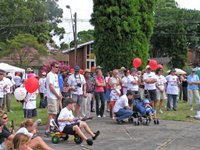 Oatley Big Day Out was well attended. About 400 people turned up at Boongara Reserve to show their dissatisfation at the continued work on the Coles site on Mulga Road. 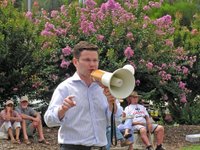 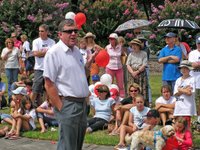 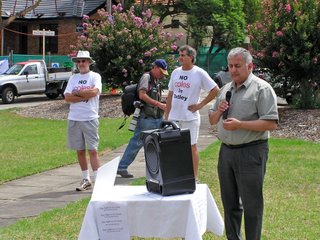 Thanks to: IGA Oatley, Clock Butcher, Oatley Lions and Roong Smithsumpan
For providing us with refreshments 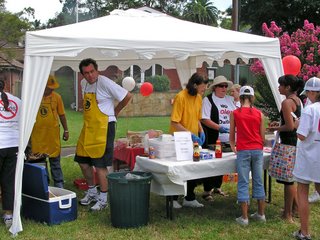 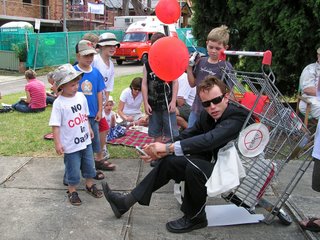 "Coles representative" getting a trolley ride

# posted by Oatley Residents Against Overdevelopment @ 10:40 AM 1 comments